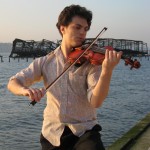 Violinist Jake Shulman-Ment is among the leaders of a new generation of Klezmer and Eastern European folk music performers. His versatility as a violinist, composer, improvisor, teacher, and folk music researcher has established him as one of the world’s leading practitioners of the klezmer violin. As a child in New York, Jake’s immersion in Yiddish culture and the klezmer revival movement, as well as rock, jazz, and classical music, formed him into an eclectic musician with multiple influences at work simultaneously. In an effort to explore more deeply the roots of the Jewish music he grew up with, Jake has done extensive research and study with Roma musicians in Romania and Hungary. He has synthesized his experiences and travels into an original sound, sometimes departing quite far into a realm of experimentation, but always remaining true to his deep roots in traditional Jewish music.
http://www.myspace.com/jakeshulmanment