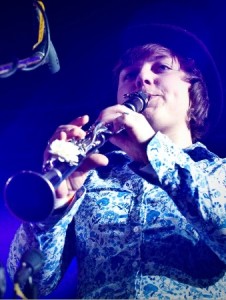 Franziska Seehausen (21) is currently considered as one of the youngest upcoming talents on the klezmer clarinet. Because of her affection to this music, she has already been referred to as “Jew of honor”. With her music she traveled in Germany, Canada, Russia and the United States. 2011 and 2012, she received a scholarship for the award klezmer festival KlezKanada near Montréal, Canada and in 2012 she was honored with the award “Klezmer Star” on the “Yiddish Fest” in Mowcow, Russia. Currently she is doing a klezmer clarinet formation with Georg Brinkmann and Michael Winograd.

In September 2012 she recorded her first klezmer album with the renowned musicians Pete Rushefsky, Dan Blacksberg, Jake Shulman-Ment and Aaron Alexander. The CD will be finished in February 2013.