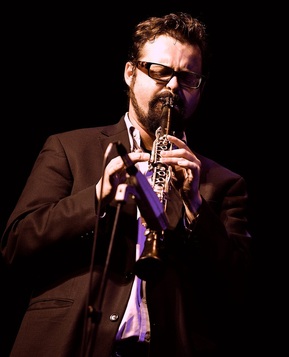 As an educator, Michael has taught seminars and workshops at many of the hubs for klezmer development including KlezKamp, KlezKanada, Yiddish Summer Weimar, Furth Klezmer Festival, Paris Klezmer workshop, Bonn Klezmer Week and others.  In 2015 Michael was one of the founders, organizers, teachers and performers of Yiddish New York, a festival and celebration of Yiddish music and culture in New York City.  Michael will also serve as Artistic Director for the 2017 Klezkanada Laurentian Retreat.

Michael Alpert tells the story of the Jewish people and the human race in song, music and the spoken word. Drawn from his family heritage and his own travels through the cultures and terrain of Europe and The Americas, his performances are sojourns through inner and outer landscapes, sagas of immigrant journey and epics of the universal search for home.

Alpert is a bearer of the old lore who grew up on surf music and mariachi as well as the plaintive melisma of the cantor, Yiddish folksong, tales of Lubavitcher Hasidim, Allen Ginsberg and the pop music of Bosnia in the 1970s. His upbringing and life bridge the era of Nicholas and Alexandra – of whom his father was born a subject – and the age of Skype and taco trucks on Twitter. He tells the old stories and sings the old songs, in a contemporary but timeless voice.

Fluent in Yiddish, Russian, Polish, Spanish, German and Serbian/Croatian and conversant in more than a dozen other languages, Alpert narrates human experience in the idiom of the people, through time-honored traditional forms and original compositions that give voice to the global condition. Like the bards of old, Alpert recounts the tales of nations and peoples, weaving the threads of history into a contemporary and original tapestry. He sings of love and work, majesty and wonder, war, revolution, the yearnings of heart and mind, of hope and the struggle for a better world. From his songs and tales both the everyday and epic drama of history emerge: the sweep of generations, the music of mountains greening and fields aflame, of cities great and tall, the melody of the earth and its creatures from time immemorial.

Generationally supposed to have been born in 1925, Alpert hails from an old-country, backwoods Lubavitcher logging and bootlegging family that was not afraid to make a lekhayim nor enjoy organ meats. As a result, he can fish, fell trees with an axe and split logs in Yiddish, Russian and Polish, but generally refrains from doing so in city parks. His bar mitzvah took place at 7:00 AM on a icy Thursday morning in the Orthodox synagogue in Waltham, Massachusetts, after which he shared honey cake and whiskey with his family and other naturalized citizens with heavy accents, and went to school. There was no party.

MICHAEL ALPERT has been a pioneering figure in the renaissance of East European Jewish klezmer music for over 30 years. He is internationally known for his award-winning performances and recordings with Brave Old World, Kapelye, Khevrisa, David Krakauer, Itzhak Perlman, Theodore Bikel, German Goldenshteyn and salsa legend Larry Harlow. Raised in a Yiddish-speaking family, he is noted for his original Yiddish songs. Adept in 20 languages and ethnic vocal styles from Russian to Mexican, his appearances include concert venues throughout North America, Europe, Israel, and Australia.

Alpert was the Emmy Award / Rose D’Or winning Musical Director of the PBS Great Performances special Itzhak Perlman: In the Fiddler’s House, Executive Producer of the two Perlman klezmer CDs on Angel/EMI, and directed the subsequent international concert tours. He performed with Brave Old World in the above productions and appeared with Mr. Perlman on CBS’ The Late Show with David Letterman.

Featured in the documentary films A Jumpin’ Night in the Garden of Eden (USA 1987), Fiddler on the Hoof (BBC/Channel Four 1990), Sabbath in Paradise (Germany 1998), and The New Klezmorim (Canada 2000), Alpert has appeared on NPR’s “All Things Considered,” “A Prairie Home Companion,” CNN, and NBC. He performs with Kapelye in the Hollywood film The Chosen and is heard on the Grammy-nominated soundtrack album from the acclaimed documentary Partisans of Vilna.

A former Research Associate at NYC’s YIVO Institute for Jewish Research, Alpert has conducted extensive documentation of music and dance in Jewish communities throughout North America and Europe, and is a leading contemporary teacher and researcher of East European Jewish traditional dance. His ethnographic work has focused on Jewish traditions from the USSR and Former Soviet Union. He is translator and co-editor of Jewish Instrumental Folk Music (Syracuse University Press, 2001), the pioneering 1938 work on klezmer music by Soviet ethnomusicologist Moshe Beregovski.

From 1998-2008 Alpert was Co-Artistic Director of Montreal’s KlezKanada Institute for the Yiddish/Jewish Cultural Arts. He currently serves as Director of Jewish Heritage and Arts Programming for the Jewish Culture Festival in Krakow, Poland, and is Senior Research Fellow at NYC’s Center for Traditional Music and Dance. He was co-founder/director of Buffalo on the Roof, a cultural arts institute exploring connections between Jewish and non-Jewish folk traditions of East Europe, and directs and performs in Night Songs from a Neighboring Village, a touring concert collaboration bringing together accomplished artists from Jewish and Ukrainian communities in North America.