A true Yiddish Music power couple, Jake and Eleonore are longtime friends of the NY Klezmer Series, having performed many times with their different groups, including Jake’s trio and Ternovka Ensemble, Eleonore’s group, Tsibele, and many Dance Parties.  Here they bring an intimate collaboration to the Series, with the possible inclusion of special guests. Don’t miss this!

Raised in a musical family in southern France, Eléonore Weill spent her youth surrounded by both classical and traditional music.

She holds diplomas in Recorder, Piano, Music Theory and Chamber Music from the Regional Conservatory of Toulouse and the National Conservatory of Paris, and also learned from the “Street Music School” playing Mediterranean traditional music (mostly Occitane, Romanian and Jewish music) on wooden flutes, hurdy gurdy, and accordion.

She then went on to complete a master’s degree in Ethnomusicology from Sorbonne University in Paris and spent a year living and studying folk music in Romania. She has enjoyed a versatile career performing early, classical and contemporary music, klezmer and Yiddish song, Romanian folk music, Occitan folk music, and various other styles on wooden flutes, piano, and vocals throughout Europe and the New York metro area with the C.M.B.V. (Baroque Music Center of Versailles), Orchestre National de Toulouse, Les Saqueboutiers, Ensemble Oneiroi, Miquéu Montanaro, Jenny Romaine and Great Small Works, Joey Weisenberg, Shpilkes, Jake Shulman-Ment, Les Eclats and many others. After years of travel and study, Eléonore now resides in Brooklyn, NY where she performs and teaches music.

Jake first began playing violin at the age of 3, and went on to study classical technique with renowned violin pedagogues Gerald Beal and Joey Corpus. Beginning studies in klezmer from age 12, he was initially a protégé of Alicia Svigals. Jake later immersed himself in related violin traditions, living in Greece, Hungary, and Romania for extended periods, becoming fluent in both the musical and spoken languages. In 2010-2011 Jake was a Fulbright Scholar based in the Eastern Romanian province of Moldavia, where he was surely the first foreigner to become a member of the famous folk orchestra “Rapsozii Botosanilor,” apprenticing himself to the orchestra’s director and master lautar violinist, Ciprian Potoroaca.

Working with the Center for Traditional Music and Dance in New York, Jake founded the Tantshoyz (dance house) program. Modeled after the Hungarian táncház movement, the Tantshoyz works to revitalize the Yiddish dance tradition and the spontaneously synergetic connection between dancers and musicians. Tantshoyz has since been replicated in a number of cities in North America and Europe.

Jake has been a faculty member of the Henry Street Settlement, KlezKamp, KlezKanada, Klezmer Paris, the Krakow Jewish Culture Festival, Yiddish Summer Weimar, and other festivals throughout the globe. His debut solo CD, “A Redele (A Wheel)” (Oriente Musik, 2012) was nominated for the German Record Critics’ Award. 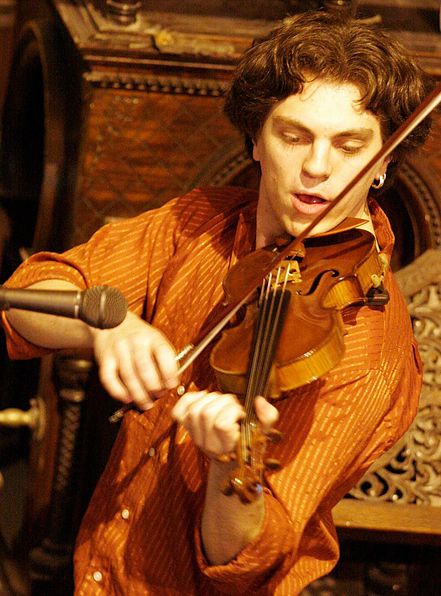