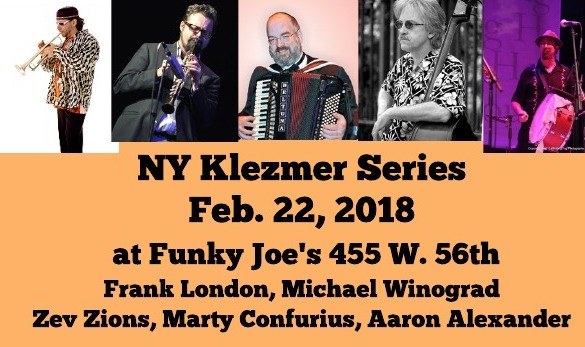 This will be an evening of traditional and new klezmer music with an all-star cast featuring some of the top klezmer musicians in the world, who also happen to be old friends getting together to play some tunes together.

The word prolific doesn’t even begin to describe Frank London. Of course, there is the Klezmatics, which he co-founded in 1986. Frank plays trumpet and keyboard and sings with the group and he’s written many of the Klezmatics’ most popular songs. But his mile-long resumé has also seen London adding virtuosity to hundreds of concerts and recordings by everyone from John Zorn to They Might Be Giants, Mel Torme to Iggy Pop, Pink Floyd, Youssou N’dour, LaMonte Young, Allen Ginsberg and LL Cool J! Called the “mystical high priest of Avant-Klez jazz,” Frank has made 30 solo recordings and is featured on over 400 CDs. His current projects include the dance theater work Salomé, Woman of Valor (with Adeena Karasick), the Yiddish-opera-in-a-Cuban-nightclub, Hatuey (with Elise Thoron), Astro-Hungarian band Glass House Orchestra, Sharabi (bhangra-klez with Deep Singh), Ahava Raba (with Cantor Yanky Lemmer), and Vilde Mekhaye (Eleanor Reissa + Frank’s Klezmer Brass Allstars). He’s a regular face on New York’s cutting-edge downtown club scene and music festivals everywhere, and has written dozens of scores for theater, film and dance. He collaborated with Judith Sloane on 1001 Voices: A Symphony for a New America for the Queens Symphony Orchestra and choir. He was music director for David Byrne and Robert Wilson’s The Knee Plays, collaborated with Palestinian violinist Simon Shaheen, taught Jewish music in Canada, Crimea and the Catskills, and produced CDs for Gypsy legend Esma Redzepova, and Algerian pianist Maurice el Medioni. He was even featured on the soundtrack to Sex and the City!

Of course London is mainly known for his contribution to contemporary Jewish music. When he first heard klezmer music, Frank says, “I was very blown away by the funky rhythms, the polyphony, the wild old-world, old school ornamentation, the particular way it expressed its Jewishness and how the instrumental music was not at all kitschy or corny the way most Jewish music I had heard up to that point was.”

​Clarinetist Michael Winograd is one of the most respected and versatile working musicians in klezmer music today. Based in Brooklyn, New York, Michael spends much of his time in transit, performing and teaching throughout the world. He is one third of the transatlantic klezmer/cabaret collective Yiddish Art Trio, clarinetist of Tarras Band, a classic 1950’s Jewish American tribute group, and the co-founder and director of the ground breaking, borderless world fusion band Sandaraa. Michael also collaborates with Cantor Yaakov ‘Yanky’ Lemmer and Klezmatics trumpeter Frank London in Ahava Raba, a group that explores the spiritual sides of Ashkanazy Jewish Music. He has played along side Itzhak Perlman, The Klezmer Conservatory Band, Socalled, Budowitz, Alicia Svigals and more. ​

Zev Zions is one of the top accordionists in the klezmer world, and has recorded and performed with Andy Statman, Klezmerfest, and many others. He has recorded 5 solo accordion CDs as well, and is a practicing Mohel during the day.

Marty Confurius, bass, is an amazing bassist who has been in the vanguard of klezmer music, as well as jazz and pop, rock and funk, in New York City, for decades. He appeared on one of the first CD in the Klezmer Revival, along with Andy Statman and Zev Feldman. He has performed with Pete Sokolow, Margot Leverett, Klezmatics, and many, many more.

Aaron Alexander,drums, is director, curator of the NY Klezmer Series, and is happy to play good music.