Litvakus is a New York based klezmer and world music quintet led by Dmitri Zisl Slepovitch. For this show they will perform as a trio – clarinet, violin and accordion. They bring together deeply rooted pieces discovered through the extensive research carried on in Eastern Europe, jazz, reggae, world and classical music being the primary background for most of the band members. The band gives a new invigorating touch to the nearly forgotten Jewish, Belarusian, Ukrainian, Polish, and Lithuanian tunes, rare Hassidic niggunim, songs in Yiddish and other languages spoken by the Eastern European Jewish communities and their neighbors. Litvakus is closely involved in creating the ethnographic theatre, through the collective’s creative approach to old music sources and storytelling. 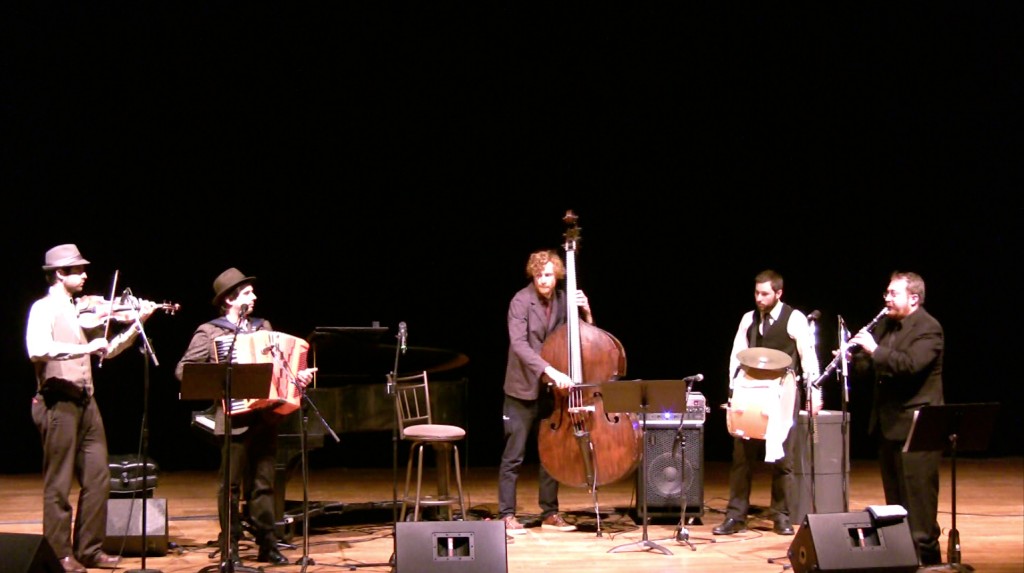 Dmitri ‘Zisl’ Slepovitch (clarinet, vocals), is a clarinetist, pianist, composer, ethnomusicologist, , a founding member and artistic director of the Litvakus and Minsker Kapelye bands. He has worked as musical consultant and music director in several shows by the National Yiddish Theatre – Folksbiene; performed and arranged music for various productions at The Folksbiene, Montclair State University, and Harvard Yiddish Players, as well as films, Defiance and The Burning Land; wrote original score for The Two Brothers ballet; taught at seminars in Jewish studies and Yiddish music in America, Europe, FSU, and Israel.

Craig Judelman (violin) grew up in Seattle, where he began studying the violin at an early age. He augmented his classical studies with jazz and folk music of various sorts, all of which he studied at Bard College. Jewish music first caught his ear in the synagogue, but as he discovered Klezmer he was overcome by the music’s power both for prayer and performance. He has spent time traveling around the world studying folk music but now makes his home in Brooklyn, where he teaches violin/fiddle, composes music for theater and plays with his old-tIme string band, The Dust Busters.

Joshua Camp (accordion), founding member of the bands One Ring Zero and Chicha Libre, has composed and played in projects of various genres over the years, including: country, folk, Irish, klezmer, meringue, and experimental groups as well as composing music for film, dance, theater, and multi-media installations. As an accordionist, Joshua has been in the recent Broadway productions of ‘Fiddler on the Roof’, ‘Three Penny Opera’, and on the soundtrack to the Lincoln Center production of ‘The Coast of Utopia’ by Tom Stoppard.