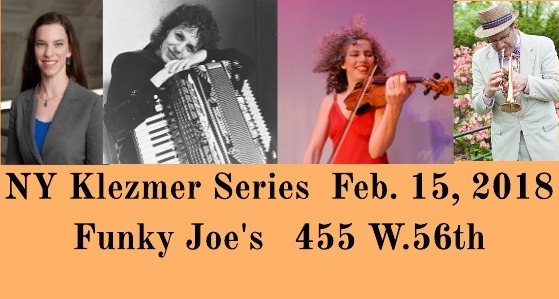 Alicia Svigals is the world’s leading klezmer violinist and a founder of the Grammy-winning Klezmatics, which she co-directed for seventeen years. She has written for violinist Itzhak Perlman, the Kronos Quartet, playwright Tony Kushner, documentary filmmaker Judith Helfand, singer/songwriters Debbie Friedman, Diane Birch et al, and has collaborated with them as a performer and improviser as well as with poet Allen Ginsburg, Robert Plant and Jimmy Page of Led Zeppelin, Gary Lucas and Najma Akhtar, and many others. She has appeared on David Letterman, MTV, Good Morning America, PBS’ Great Performances, on NPR’s Prairie Home Companion, Weekend Edition and New Sounds, and on the soundtrack for the L-Word. She has a brand new CD with Uli Geissendorfer which will be available for sale!

Jordan Hirsch learned Klezmer the old fashioned way: on the bandstand, playing with masters like Paul Pincus, Danny Rubinstein, Howie Lees and, most notably, Ray Musiker. Alongside his career as an active freelance trumpeter in New York City, Jordan is an innovative music educator, having co-founded the first school based British Brass Band program at the prestigious St. Hilda’s and St. Hugh’s school, where he has been teaching for the last 17 years. In addition to recording and performing with the biggest names in Jewish music like Avraham Fried, Shlomo Carlebach, and Dudu Fisher, he performs in Klezmerfest with Greg Wall, with whom he has recorded two critically acclaimed CD’s, and The Kleztraphobix, whose CD another bottle of vodka was also warmly received. He is a member of Frank London and Greg Wall’s Ayn Sof Arkestra, and has performed frequently with the National Yiddish Theatre/Folksbiene.

Aaron Alexander, drums, is director/curator/janitor of the NY Klezmer Series.