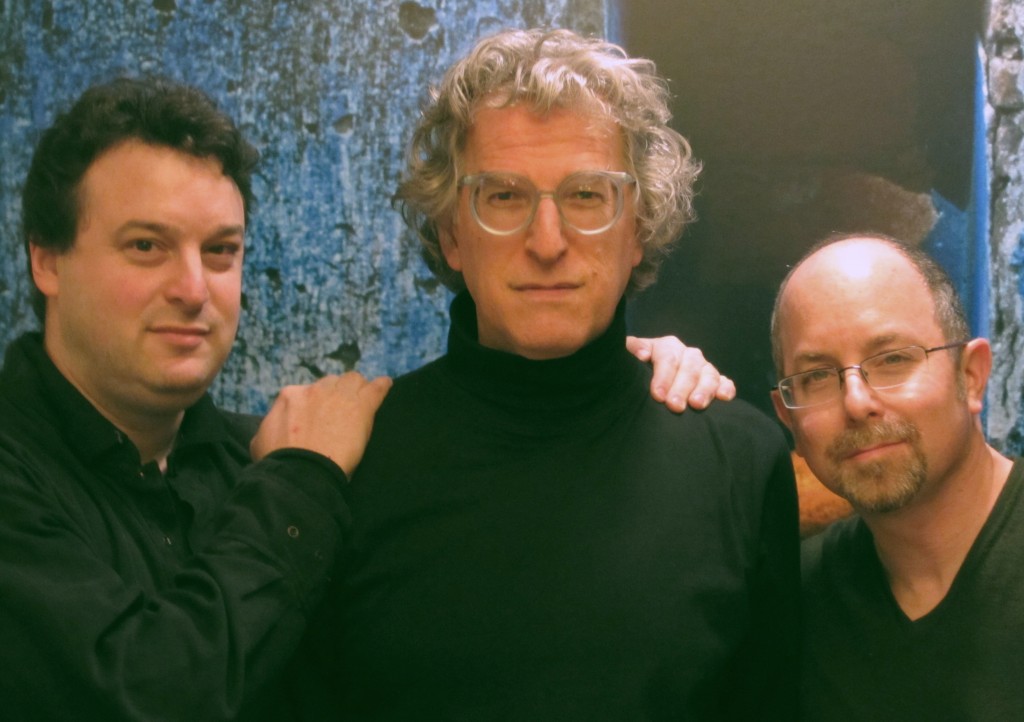 R2G is a dynamic new trio formed by longtime stars of the klezmer revival, Joel Rubin, Pete Rushefsky, and Steve Greenman. R2G performs original compositions and improvisations in addition to their own arrangements of the classic East European Jewish instrumental klezmer music and mystical hasidic nigunim (melodies of spiritual elevation). With its virtuosic style and sumptuous, richly ornamented sound, their music is at once a meditation on the Russian-Jewish musical legacy and an expansion of it into the present. The trio also experiments with extended structures, such as “concert form klezmer” suites that meld the traditional klezmer genres with Ottoman Turkish concepts of art music for listening. The concert form expands the expressive possibilities of klezmer music and provides a pathway for the musicians to create performances that develop more extended musical narratives. But the group can cut it up on the dance floor as well. “Inspiring, jaw-dropping and foot stomping,” raved Beth Cohen, director of the annual KlezmerQuerque Festival.

R2G is available for concerts, dances, lecture-demonstrations, master classes and workshops, and college and university residencies.

Joel Rubin has been one of the leading figures in the international klezmer movement as performer, scholar, author and educator for the past thirty years, earning accolades from sources as diverse as klezmer giants Dave Tarras and Max Epstein, international clarinet soloist Richard Stoltzman, avant garde composer John Zorn, and Nobel Prize Laureate and poet Roald Hoffmann. Dr. Eleonore Büning of Southern German Radio writes, “Rubin … is the most virtuosic klezmer clarinetist in the world today … He commands this art like nobody else.”

He studied clarinet with Stoltzman and Kalmen Opperman and holds a Ph.D. in ethnomusicology from City University (London) for his pioneering work on klezmer music. In addition to performances with traditional musicians such as the Epstein Brothers, Moussa Berlin, Leon Schwartz, Sid Beckerman, and Danny Rubinstein, Rubin was a founding member of the pioneering revival group Brave Old World, the duo Rubin & Horowitz, and has led the Joel Rubin Ensemble since 1994. He has also toured with the Klezmatics and the Klezmer Conservatory Band, and has performed with Daniel Kahn and The Painted Bird. Rubin has recorded seven albums of his music. Midnight Prayer (Traditional Crossroads) was ranked one of the most important recordings of 2007 by the Jewish Week, and Azoy Tsu Tsveyt (Tzadik) with acclaimed composer and improviser Uri Caine, was chosen by exclaim.ca as one of 10 favorites in the category Improv & Avant-Garde for 2011. Rubin has appeared at the Berlin Philharmonic, the Concertgebouw in Amsterdam, the Leipzig Gewandhaus, Cité de la Musique in Paris, the Tonhalle in Zürich, Carnegie Hall and Lincoln Center. He is Associate Professor and Director of Music Performance at the University of Virginia, where he also leads the UVA Klezmer Ensemble.

Steve Greenman is recognized internationally as one of the finest practitioners of traditional East European Jewish klezmer violin. Described by the Washington Post as “particularly impressive,” and as “extraordinary” by the Pittsburgh Post Gazette, Greenman is the producer and lead performer of the landmark recordings Stempenyu’s Dream and Stempenyu’s Neshome, which contain his original klezmer and Jewish spiritual compositions. Co-founder of the Khevrisa ensemble with Walter Zev Feldman, he is also co-producer and lead performer of the recording Khevrisa: European Klezmer Music on the Smithsonian Folkways label. Greenman currently leads the Stempenyu’s Dream ensemble, Di Tsvey with Pete Rushefsky, and the Steven Greenman Klezmer Ensemble, and has performed internationally with Khevrisa, the Joel Rubin Ensemble, the Klezmatics, Budowitz, the Flying Bulgar Klezmer Band, and Kapelye. He has taught at KlezKamp, KlezKanada, KlezFest London, Yiddish Summer Weimar, and Master Class de música tradicional Santiago de Compostela (Spain), and has performed at the Jewish Culture Festival in Krakow, Poland, at Toronto’s Ashkenaz – A Festival of New Yiddish Culture, and at the International Klezmer Festival in Fürth, Germany. In addition to klezmer music, Greenman is an accomplished performer of Hungarian nota and urban East European Romani (“Gypsy”) music and is a performer with the ensemble Harmonia. As a concert performer, he has been a guest soloist with the Cleveland Pops Orchestra, the Canton Symphony and the Akron Symphony, performing his own arrangements of traditional East European Romani (“Gypsy”) violin music and klezmer music.

Pete Rushefsky is a leading performer, composer and teacher of the tsimbl (cimbalom), the traditional hammered dulcimer of klezmer music. He has performed internationally at venues such as Carnegie Hall, Lincoln Center, the Concertgebouw (Amsterdam) and Cité de la Musique (Paris). Rushefsky has concertized and recorded with classical violinist Itzhak Perlman and has played with many of klezmer and Jewish music’s leading performers, including Cantor Yitzchok Meir Helfgott, Andy Statman, the Klezmer Conservatory Band, Alicia Svigals, Michael Winograd, Lisa Gutkin, Michael Alpert, Adrianne Greenbaum, and Jake Shulman-Ment. He performs regularly in the duo Di Tsvey with Steve Greenman and with the Joel Rubin Ensemble. His CD with violinist Elie Rosenblatt, Tsimbl un Fidl: Klezmer Music for Hammered Dulcimer and Violin, was ranked a “gem” by Rainlore’s World of Music, which “must be considered essential in any klezmer collection.” A popular instructor at workshops such as KlezKanada, KlezKamp and Yiddish Summer Weimar, Rushefsky is the author of a pioneering instructional book on adapting the American 5-string banjo for klezmer, and frequently publishes and lectures on ethnic music in America. He also serves as Executive Director of the Center for Traditional Music and Dance in New York City, dedicated to maintaining the vitality of immigrant performing arts traditions. The Center’s An-sky Institute for Jewish Culture works to research and preserve Jewish music and dance traditions.