Come Celebrate the 1st Night of Khanike with a Dance Party, Live Klezmer Music,  Latkes, and Donuts.  We welcome back Steve Weintraub from Philadelphia to lead Dance with a great band featuring: 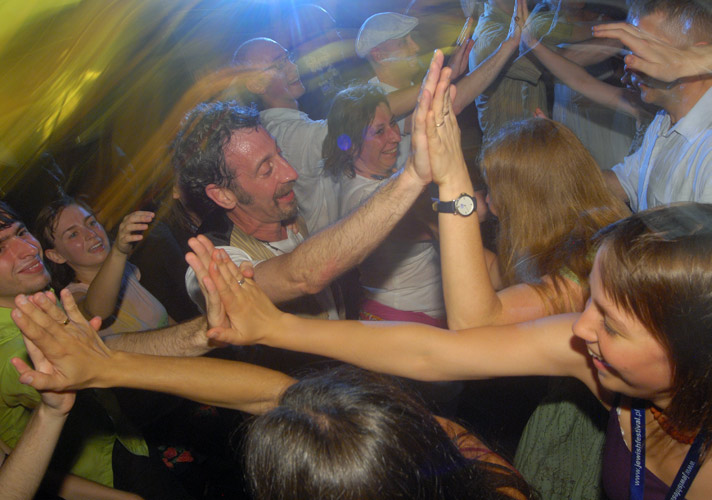 Steve Weintraub is a teacher, choreographer, and performer of Jewish dance, particularly  Yiddish dance, the dance to klezmer music.       Born on Governor’s Island, Bar Mitzvahed in the Bronx, and living now in Philadelphia, Steven Lee Weintraub received his dance training in Manhattan with Alvin Ailey and Erick Hawkins, among others. He is in international demand as a teacher of traditional Yiddish dance at festivals and workshops including Klezkamp, Klezkanada, and festivals in Krakow, Furth, Paris and London to name a few.  Steven delights in introducing people to the figures, steps and stylings of the dances that belong to Klezmer music. He has often been called the “Pied Piper of Yiddish Dance”; his years of experience leading and researching Yiddish dance allow him to quickly weave dancers and music together in astonishing ways. Young and old, from all backgrounds, find it easy to share in the joy of Yiddish dancing.

Zoe Christiansen is a remarkable accordion, keyboard and clarinet player with particular expertise in eastern European and Turkish styles and Klezmer music.  She has a music degree from New England Conservatory and was a regular attendee and instructor at Klez Camp and Klez Kanada.  She has traveled extensively in Turkey, Albania and Kosovo studying traditional instrumental and vocal styles.

Jordan Hirsch learned Klezmer the old fashioned way: on the bandstand, playing with masters like Paul Pincus, Danny Rubinstein, Howie Lees and, most notably, Ray Musiker. Alongside his career as an active freelance trumpeter in New York City, Jordan is an innovative music educator, having co-founded the first school based British Brass Band program at the prestigious St. Hilda’s and St. Hugh’s school, where he has been teaching for the last 17 years. In addition to recording and performing with the biggest names in Jewish music like Avraham Fried, Shlomo Carlebach, and Dudu Fisher, he performs in Klezmerfest with Greg Wall, with whom he has recorded two critically acclaimed CD’s, and The Kleztraphobix, whose CD another bottle of vodka was also warmly received. He is a member of Frank London and Greg Wall’s Ayn Sof Arkestra, and has performed frequently with the National Yiddish Theatre/Folksbiene, including their recent production of Lies My Father Told Me.  link

Lauren Brody, a founding member of both Kapelye and Mikve, is one of the world’s foremost experts in traditional Bulgarian music, and her singing and accordion-playing in Yiddish performances is legendary. She travels the world as a bearer of Yiddish musical tradition.Joanna Sternberg, bass, may be the workingest bassist in town these days. She is a member of Fraydele, and plays duo with Joe Cohn at he Jalopy Tavern every Friday. She plays with any number of ensembles in a wide range of genres. Recently she began a klezmer trio with Andy Statman and Pete Rushefsky.